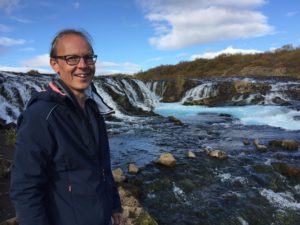 “With that kind of brace I wouldn’t get on her”, Mark Rashid said to me when I was about to mount Harpa, an Icelandic mare in the middle of Colorado. He was right, she was not giving into the bit, not a bit.

After his mentioning this, I decided to wait instead of getting on her and trying to sort it out later. I decided to wait because it is not a good idea to disregard Mark Rashid’s advice 🙂 Plus it very soon dawned on me that I most probably would strengthen the brace by getting on her from a braced position in the first place; which would also make sorting it out later more cumbersome than sorting it out now.

I actively waited. Active waiting, first and foremost, means waiting. You would stand there with the reins in your hand. The active part comprises instilling a change in the horse. For this to happen you need to keep the connection with the horse. So it is of no use letting go of the reins. But under no circumstances you should pull either, as this would be totally counterproductive and, hence, lead to more waiting.

My favorite method comprises thinking about her changing something, i.e. thinking about moving her head in that case. When you get a bit of kinda tickling sensation in your finger tips, the sensation of a millivolt of electricity or the like, you would then think even more and after a few seconds, (or minutes if destiny has it :-)), there it is: she releases and the brace is gone. You feel a connection with no stiffness and tension whatsoever and you know you are good to go.(1)

The moment she released marked a turning point in my sessions with that Icelandic mare; especially after Mark further elaborated on the concept by extending it to when you come to a halt: Ideally you would slow down until you come to a stop but then, once again, actively wait, until she releases. So you would not turn to something else, be it dismounting, taking her back into a walk, backing her up, whatever, don’t do it, until after she gives.

As soon as I followed those two advices, albeit rather one advice, namely – “Don’t do anything until after she releases.” – everything became much easier with her and I mean ‘much’ easier.

Three years later, following the recommendation of one of my horse anatomy instructors (2), I got me a copy of a book by Jean-Claude Racinet, where I was flabbergasted very soon when I came across his description of what he referred to as “mise en main” or “bringing in hand”(2).

Not only did he describe exactly what Mark had taught me, furthermore in bold typeface he pointed out that this little ‘release-trick’ is nothing less than “the necessary and sufficient condition for total collection, that is, for establishing the one and only balance (…) which will preside over all the evolutions of the horse.” – wow, if that ain’t a bold statement. Dammit.

I immediately understood why that little thing had felt so good and changed so much for me: If it constitutes the best foundation to build everything upon, no wonder that everything felt much easier, lighter while at the same time more powerful once you had entered the ‘release-zone’.

So: Fantastic if you achieve the release and “bring” her “in hand”! But what if for some reason it does not seem to work with a horse?

Racinet, in his next chapter, talks about obstacles to the “bringing in hand”. He states that “without the shadow of a doubt (…) the snag lies in vertebral blockings, which may happen with the cervical vertebrae, and the thoracic vertebrae as well”.(3) In essence, if we can get rid of minute deviations from the ideal positioning of the elements of the spine, we will get our release all the time.

Having finished reading this sentence I instantly knew just the right man for the job: Jim Masterson.

Masterson, in his method (4), an extensive set of integrated equine performance bodywork techniques, amongst other things, rids the horse of unnecessary tension. One of the modalities of the Masterson method is the so called lateral cervical flexion (5), specifically targeted to remove such tension between the vertebrae. It thereby restores their ability to slide back into ideal working positions, the very thing Racinet is aiming at, when he states that “lateral flexions (…) of neck coupled with a jaw yielding may release vertebral blockings from (…) atlas (6) to as far as (…) the third thoracic vertebra (7).”(3) (8).

When I presented these concepts to my trainer Amanda Barton (9), I was in for a surprise or rather two: Not only did she share my experience with Mark Rashid firsthand – both literally and figuratively – she has also been working on overcoming possible obstacles to this “bringing in hand” by means of riding. As it turned out, she already had students freeing their horses from vertebral blockings through these ridden techniques.

To sum it up in a convoluted sentence:

Barton and Masterson provide techniques which Racinet is looking for to remove obstacles to the precondition of total collection which only occurs in the balance achieved after the horse releases any brace she might carry with her as taught by Rashid.

And to sum it up as a recipe:

1. Before you do anything else, actively wait for the release.

2. Make sure you have a connection with the horse’s mouth, but even more importantly, don’t pull.

6. If it still doesn’t work, let me know because that would be really interesting.

(1) for lots of useful hints on how to develop this connection, I highly recommend Mark Rashid’s excellent book “A Journey to Softness”; Amazon Link
(2) Christian Debski; https://pferde-gesund-bewegen.de/
(3) Jean-Claude Racinet; “Total Horsemanship”; Amazon Link; Kindle edition, location 383, Fig. 5; BTW, Racinet gives a lot of credit in developing these thoughts to another horseman, François Baucher
(4) Racinet; location 400
(5) Jim Masterson; “Beyond Horse Massage”; Amazon Link; http://www.mastersonmethod.com/ ; BTW, there are more things on Racinet’s wish list that the Masterson method can handle: e.g. loosening up the TMJ or removing blockages at the withers and even further down the back
(6) Masterson; location 737
(7) the top vertebra of the neck, right at the poll
(8) where the withers get going
(9) Situated in the amazing New Forest of South England, Amanda Barton on a regular basis also holds clinics throughout Europe. Please see her website and clinics schedule at http://www.tilefieldequestrian.com/

[Amanda’s note: Hans-Michael is a good friend of ours and a student of Mark Rashid.  He kindly wrote this blog and I love the connection between the softness we are looking for in training and the work of Jim Masterson.  Further discussion of the vertebral blocking that Hans-Michael mentions is definitely a blog in itself, but in short, I have come across horses who are able to release to some degree in the jaw, poll and neck but are not able to get soft or connected through their whole bodies when they are in motion.  In this case they are unbalanced and blocked further back in the body. Some of the most useful ridden work I have come across to help with this issue is that of Jean-Luc Corneille.  Jean-Luc discusses the vital importance of the correct combination of longitudinal flexion, lateral flexion and axial rotation of the spine.  If the spine is not correctly set up for the movement its virtually impossible for the horse to be as soft as we would like.  You can see more about this in this short clip at https://www.youtube.com/watch?v=jmAfKN-j7Ss&fbclid=IwAR34MgBPhFfFqlGvtTGN0sGUKmMo_NCcaVCcjtKD6PBaZXBqOPMaxJt0Yo8 ]