“I could see peace instead of this.”

A Course in Miracles

Now it was my turn to ride the beautiful black pinto who was so highly praised by everybody else in the group. “You will love her!” they said as I got on her back.

As soon as I had taken the reins, she took them back. I took them again and she took them back – again. This tug of war kept going for the next half an hour in which I had the “pleasure” of riding with her. As she would pull ever more and I would pull back ever more, things increasingly went south. To avoid a wreck, I decided to settle for a foul compromise and grudgingly let her do whatever she wanted for the rest of the ride. She had won. I had lost. That is what I felt at the time.

It is important to note that during this first half an hour of fighting I had continuously told her to do as I said. Exactly as I said, that is, with no room for further negotiations. And she had continuously replied by telling me to do exactly as she said with no room for discussions, neither. Mark Rashid had described such a situation to me: “If you are willing to fight with a horse, he will always be willing to fight back.”

One could argue – and I remember having done just that on this occasion – that I had no choice but to keep going. Or “Should I really have her allowed to get away with that?”

Since that incident from a couple of years ago, I have found it much more beneficial to ponder on Klaus Hempfling’s enquiry instead: “How many people say that in a particular situation they had to react in such and such a way because other beings provoked that response?”

Having become more honest with myself and thus including me in this very group of people, I then came across the Course in Miracles’ proposal to refrain from fighting and choose “peace instead of this.” But would it have been possible in that particular situation? Would peace really have been the option to go with?

Luckily providence arranged it so that last autumn I met that beautiful black pinto mare again. To make the long story short: This time I chose peace. We had a fantastic ride! 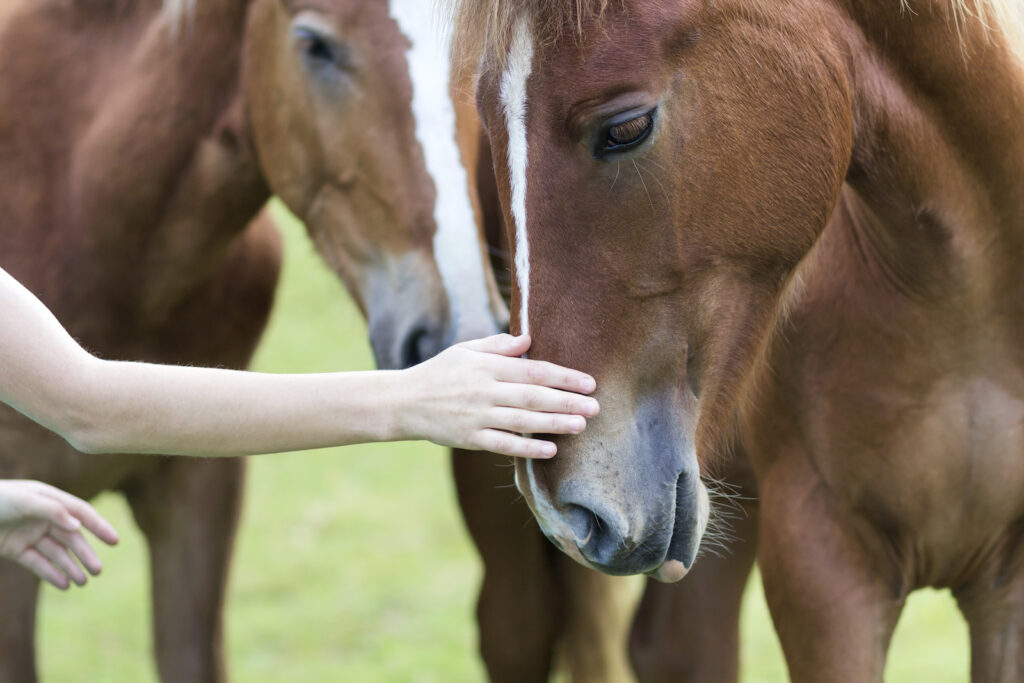 The following describes exactly what had happened (it is from Klaus Hempfling describing one of his sessions): “However aggressively the horse conducts himself, the person (…) remains completely unperturbed by it. Softly, gently, yes almost tenderly, he lets the horse act and only controls the situation with him. And the horse, does he have any other choice but to finally give himself in total trust to a person who behaves this way? Is it not then only a question of time? I believe it is.”

I must add that in my black pinto case it took no more than thirty seconds. We already had it all sorted out before I even got on her back.
Sometimes it does take longer, however. Especially, when it is not only us that tap into the reservoir of aggression, but the horse has been trained to fight as well. We are confronted with such circumstances, when the horse had to resort to active resistance repeatedly in the past, because the training situation had become unbearable for her.

There are quite a lot of horses sharing that unfortunate background. No big wonder, when we consider the way training of riders and (as a byproduct) training of horses is being conducted at many a place: “Riding meant sitting-on-it whilst not-falling-off. For the more advanced, domination of the animal was added to the package, if need be with the whip and the spurs”, Juli Zeh has pointedly characterized her “education”.

Some horses then give up, while others respond in a more outspoken manner. Many of the latter, due to them having been judged as useless for riding school, are then sold to new owners, who have no idea which “training” their soon-to-be family member has been subjected to, sometimes so “effectively” that he or she is pretty fast to enter fight mode.

The other day, I was riding another mare for the first time. As soon as I asked her to slow down our walk, she would resist by raising her head and thereby losing her frame, followed by coming to a complete stop and finally refusing to move. When I then asked her to get going again, she would violently shake her head. Simultaneously she would lift her forelegs ever so slightly off the ground to let me know that she was ready to rear.

At this point I decided to try backing up. Because she would not move, movement had become top priority – any movement that is, the direction did not matter any longer. At first, I still had an inkling of fight mode in me, so the attempt was set up to fail. It even made her lift the forelegs higher. But then I caught myself and totally melted into peace while still asking her to back up. The very second I had reached the point of “complete absence of adrenalin, any impulsiveness, any excitement” , she let go without further ado. Not only that, she collected and stepped back a couple of steps in a relaxed and harmonious manner. And even better, forward movement also had become an option for her again. After a couple more tries and minor hiccups due to the both of us being slightly disorganized about the immediacy of our transformation, we then succeeded in willingly and peacefully walking forward real slow.

Remember that the option exists! Often, we are blinded by the situation and caught in our feelings, so we forget that we can always choose “peace instead of this”.

If you find yourself in a fight, don’t waste even more of your and your horse’s life energy on it. “If the horse does not like you, he clearly will not learn. Teaching an angry or enraged horse is a total waste of time.”

When you are having an argument over who is going to buy what for whoever’s birthday, take a step back and say to yourself: “I could see peace instead of this.” Expand that practice – just as the course in miracles recommends – by becoming very specific about the particularities of the issue. Regarding the birthday-present-quarrel you might want to state: “I could see my friend and I having a joint session of a heck of a shopping spree instead of blaming each other for not being inventive enough to get a decent present for Karl.” or “I could see us riding in harmony to the outside of the arena instead of me ferociously yanking him there.”