"Imagine that you're a tree"

Picture the horse with her halter being tied to a fencepost or a tree. Ideally, she would accept the place where we put her and peacefully stay next to the tree. Should she pull, the tree will firmly stand its ground, while at the very moment she stops pulling, she will experience a release. The reward instantaneously sets in because the tree does not have to react in any way. Just standing there and doing nothing happens to be perfectly suited for the job.

But when there comes a human into play, namely me, on the other end of the lead rope or the reins, the situation can be quite different: the pulling horse would make me pull back. From that point forward things may get out of hand – both literally and figuratively: Should the horse decide to respond to my pulling by pulling harder, and should that second pulling of hers then lead me to the decision to pull even harder on my end, we will have just started a fight that the human by sheer brute force will never manage to win.

Being a tree makes sure that this tug-of-war will never happen again – no pull on my end, no harder pull in return. That’s it.

But, you might ask, what if she does not give in and just keeps pulling, not harder but at a constant rate, would not that be bad enough, if for instance, I am riding out and she would just take the reins and me being a tree and all, she would just drag me with her and take off and that would be it, or?

To my amazement this has not happened to me since I became a tree. Never once; and the reason lies with the immediacy of the release that I briefly mentioned at the beginning of this chapter.

As it turns out, the horse will always be on the lookout to find a release. Even if it appears to the human as if she were pulling constantly, she will always look for such an opening. The tree will reward any such, albeit miniscule and short try on her part, because it is set up to do so. Were the tree to pull while the horse tested for a possible release, by the time the tree let go, the test window would be long gone and, having found no release, the horse would continue to pull. But by the tree accepting the pull and doing nothing else, each time the horse tries, she will feel an immediate release, respond accordingly and in turn let go. 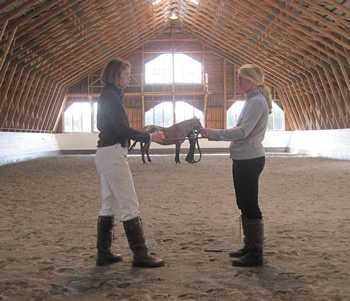 Practical Application
To put these concepts to work for you:

Try it with a friend. Let him be the human and hold the reins while you pull on them, simulating the horse. Let him react in the standard way and pull back. You will notice no release whatsoever whether you let go or not, leaving you quite frustrated. Then find a tree, wrap the reins around and pull again. This time, as soon as you let go, you will notice an immediate, clear and very rewarding release in your fingers and wrists.

Experiment further and take turns in playing the horse, tree and the human respectively. This will help you greatly in refining your tree skills and thereby getting rid of any residue of pulling instinct.

For the next couple of weeks keep in mind and repeat the slogan “I am a tree” whenever you are on the horse. This way you will stay alert for any inkling of pulling and be able to avoid it from the outset. If you follow this routine for a few months, you will automatically react correctly, namely not.

Lesson 5 - How to get more buzz